I recently purchased a Seagate 3TB hard drive. I primarily wanted the device for my Ubuntu 12.04 machine, the drive did not however show up. Of course it showed up straight away on Windows 7.

In order to get this drive working you need to do:

Edit & View Molecules on the go! 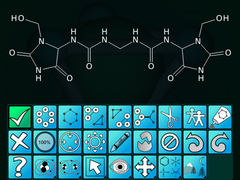 Having newly acquired an IPad, the first thing I did was download some useful apps for it that I already have on my iPhone. I then began to look for cheminformatics apps that might be useful as part of my work, and came across "Mobile Molecular Datasheets". This is an app that allows a user to view and edit chemical structures on the IPad. More details on the app can be found at: molmatinfo.com. The app is developed by Molecular Materials Informatics and was last updated on the 2nd of December 2010. It is supported on iOS4.2+ and is 1.9mb to download. It does however cost £8.99 (so not the cheapest of apps).
The molecules are essentially organized into a collection of data sheets. They can be shared or sent via email. The current formats supported are Mol and SDF files. The app has the advantage that it can be integrated into workflows. 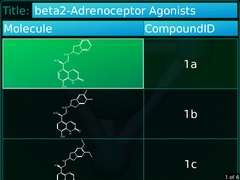 
If anyone has any experience with additional cheminformatics IPad or iPhone apps it would be great to hear from you.
Posted by Ed Cannon at 15:32 No comments:

Redirecting Eclipse Output to a file

Whilst I think this tip is quite fundamental, it's worth noting. Being able to direct output from the Eclipse console to a file, particularly if there are warnings generated from a program you have little to no control over and the file is rather large, and the start of the output goes off the console screen.

To redirect to a file simply:
1. Go to the Run menu
2. Run-> Run Configurations
3. Go to Common tab
4. Tick file on standard input/output
5. The console output will then be written to that file.
Posted by Ed Cannon at 12:57 No comments: 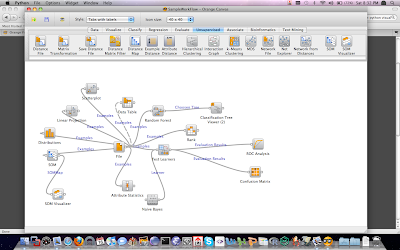 Orange is primarily for machine learning, however it also has tools to support workflows in bioinformatics, one can also use the molecule visualizer to view smiles strings from a file.
Posted by Ed Cannon at 16:09 2 comments: 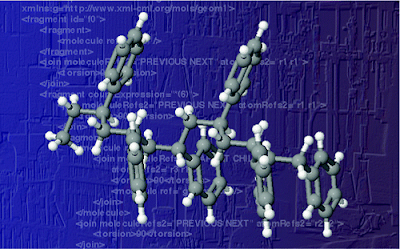 I was very intrigued to hear from a colleague/fellow developer, that apparently CML (Chemical Markup Language) is not very well used in the field of cheminformatics. Is this true of just industry and private companies? Does academia (other than the Murray-Rust group and Henry S. Rzepa) relish this format, I would be interested to hear peoples' views.

From the Journal of Chemical Information and Modeling, "Chemical Markup Language" has retrieved 76 hits. Of which, 17 of these papers have included either PMR or Henry S. Rzepa (approx 22.4%). 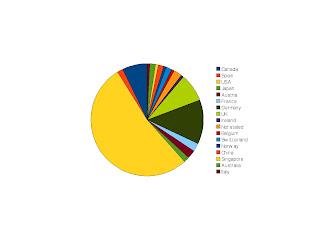 One article I found on line that interested me was "10 Useful Bioinformatics Skills to Have". Clearly all ten points apply to a professional in the field of cheminformatics. However it would be interesting to know what qualities are considered most highly amongst employers.

For this purpose, I have reviewed the jobs advertised on the Computational Chemistry List from the 19th of February 2010 to the 1st of September 2010. Alternative job sources could have been found, I agree, however the site is fairly representative of the types of jobs people having finished a degree in computational chemistry may consider.

Have Your Cake and Eat It
Of the 125 jobs, the pie chart above shows the distribution of cheminformatics jobs by country around the world. Clearly the cheminformatics job market is dominated by the USA, taking just over 50% of all the jobs advertised on the CCL.net over the last 8 months. Germany has taken silver on the podium with 16 positions available, whilst the UK has taken bronze with 10.

What skills are employers seeking?
Well this is a good question, now that we've established where the main job market / demand for cheminformatics jobs are. 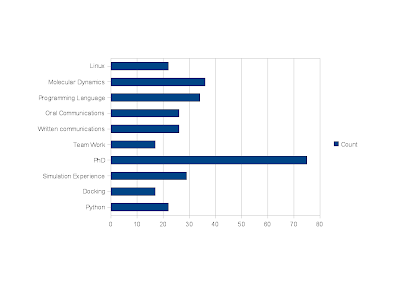 For the more interested reader, I have given a more detailed breakdown of the results in the table below.

I am just preparing the last few tweaks to my poster before I present it in the ( CINF Scholarship for Scientific Excellence) (Chemical Information) on Sunday the 22nd of August. This should be an exciting event, there are 8 other posters. The posters range in content from semantic web applications, through to toxicity prediction and virtual screening.


With regards to the rest of the program, unfortunately I can not stay past Monday, however some talks that I would have liked (may not get to see on Sunday) to have seen include:

In the general papers
1.#84, Chemistry in your hand by Dr Anthony J. Williams (ChemSpider).


2. #86 Extracting information from the IUPAC Green Book, by Prof Jeremy G Frey from the University of Southampton.

Data Intensive Drug Design
1. #12 Public-domain data resources at the European Bioinformatics Institute and their use in drug discovery, by Christoph Steinbeck.

There are also a number of presentations from the Semantic Web in Chemistry division.

#36 ChemicalTagger:A tool for semantic text-mining in chemistry
by Dr Lezan Hawizy, University of Cambridge.
Posted by Ed Cannon at 01:26 No comments: